Skin, nails and hair are the major human integumentary system parts, where the first one is the largest organ not only of the integumentary system but also of all the organs in your body. Guarding the internal soft structures, ligaments, muscles and bones, it forms covering around all of your body and is made up of the multiple layers of the ectodermal tissues and almost all of the human skin is covered with hair follicles. Despite the presence of hair follicles at every single point, this integument may seem to be almost hairless at some places.

However, hair is usually very thick on the head as it serves as a protective covering against any physical damage to your skull. The nails, on the other hand, are not found everywhere on your body but are limited only to the tips of your fingers and toes. If you compare the integumentary system of the human body with that of other animals, the scales and features are totally absent in the former. Below follows a brief description of the major integumentary system parts: 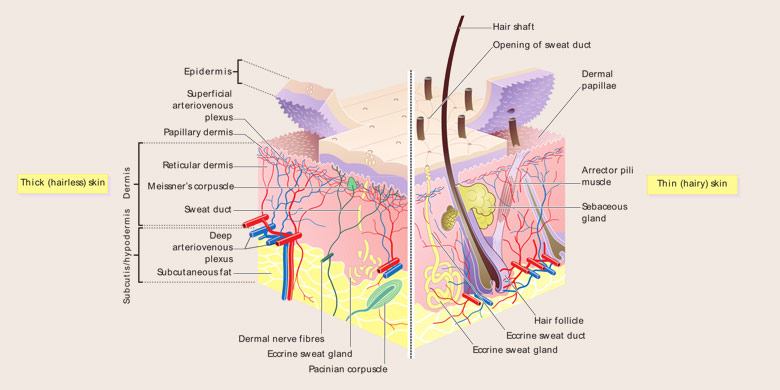 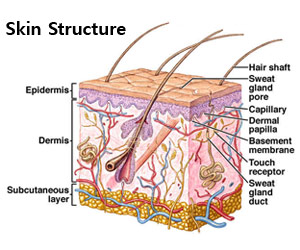 Stretching across the total area of about twenty (20) square feet, the skin is the largest organ of your human body that consists of three major layers, namely, dermis, epidermis and hypodermis. As the very names suggest, epidermis and hypodermis are located above and below the dermis, respectively. The primary tasks of this thick covering are to protect our internal delicate organs, tissues, muscles and bones against microbes & hazardous elements; regulation of the body temperature; and permitting the sensation of touch, pain, heat and cold.

Along with creating our skin tone, the outermost layer also provides a waterproof barrier. Concerning the composition of intermediate stratum (dermis), it contains tough connective tissues, sweat glands as well as hair follicles. The deeper subcutaneous stratum, on the other hand, is made up of connective tissue and fatty substances. Melanocytes are the epidermal cells and are responsible for the synthesis of melanin pigment which, in turn, renders coloration to the skin. 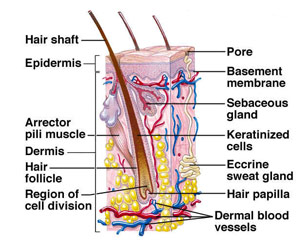 Growing from the follicles, in the dermis of your skin, hair is a biomaterial assuming the shape of a filament. Excluding the areas of glabrous skin, all of your body is covered with the follicles, which lead to the creation of fine vellus hair and thick terminal hair on the skin. The biomaterial making up the hair is called keratin, where the individual keratin components undergo assemblage into bundles for the formation of intermediate filaments that are tough, insoluble and sufficiently strong. Here it is worth noticing that chitin is the only other biomaterial that is known to have as much toughness as that of keratinized tissue.

Considerable thickness of hair can be witnessed on one's head, while the attitudes of people towards hairstyle and hair removal show great variations based on the particular cultures and the historical periods. However, there is no denying the fact that hairstyles are said to be the indicative of an individual's position in the society, including their religion, gender as well as age. Looking at the structure of hair, every strand can be divided into three distinct regions, viz. cuticle, medulla and cortex. Here, the medulla is the innermost open & disorganized region, and is not always present. The cortex is the organized and highly structured middle layer that is the primary source of water uptake and the mechanical strength. 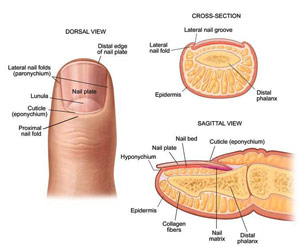 Covering the dorsal side of the terminal phalanges of toes and fingers in humans, nails are the horn-like envelopes that give protection against physical damages and assist the individuals in manual work. Composed of keratin (a tough protective protein), just like that of hair, nails are also hard and involve considerable amount of strength. Moving from outer to the inner part, the nail is composed of the nail plate, the nail matrix and the nail bed. Present beneath the plate, matrix is the part of bed that contains the blood vessels, nerves and lymph and is responsible for the production of the cells that, later on, become the nail plate.

The tissue that rims the base of the nail and overlaps the plate is cuticle, while lunula is the whitish half-moon found at the base of the nail. The only living part of the nail is located at its proximal end below the epidermis which grows at the average rate of about 3 mm per month. It is surprising to note that the fingernails grow four times faster than those of the toenails, whereas the nail of index finger grows even faster than those of other fingers. Some other factors that influence the growth of nails include the age of the individual, sex and the time of the year. In this respect, the nails grow relatively faster in males, in younger people, and in the summer season.

A graduate in biological sciences and a PhD scholar (NCBA&E University, Lahore), M. Isaac combines his vast experience with a keen and critical eye to create practical and inherently engaging content on the human body. His background as a researcher and instructor at a secondary school enables him to best understand the needs of the beginner level learners and the amateur readers and educate them about how their body works, and how they can adopt a healthier lifestyle.